What's this blog about?

I teach several courses under the broad topic of "Multicultural Education," prioritizing social justice issues of access, power/privilege, & narrowing the academic achievement gap. I am a person of color and I almost always have a white co-teacher. We include topics, such as: racism, sexism, heterosexism, ableism, ethnocentrism, deculturalization, transforming curriculum, etc. This is a place where I post information that we teach; lesson plans for activities; and resources we use and/or which are shared with me by my adult students.

What does White fragility mean to you? (Series of Videos)
https://projects.seattletimes.com/2016/under-our-skin/?fbclid=IwAR1MnwGYGVVaCSlm6Iy26Ho88jDN3hjCHKQn5LJnmmTJ4-fWenyLSCT2als#

Settler Privilege
https://www.beaconbroadside.com/broadside/2018/11/unpacking-the-invisible-knapsack-of-settler-privilege.html?fbclid=IwAR1r5fl23eUd8bAG8EKd2l_YLSW_u48LvVnt3EFvQaPyRKD4CkbXz6QilB
THIS PIECE IS LONG OVERDUE (and it's short) - Unpacking the Invisible Knapsack of Settler Privilege by Dina Gilio-Whitaker, who also co-authored a great book “All the Real Indians Died Off” and 20 Other Myths About Native Americans, and her forthcoming book, As Long as Grass Grows: The Indigenous Fight for Environmental Justice from Colonization to Standing Rock.
Peggy McIntosh first popularized the concept of white privilege in her now-classic 1989 essay “White Privilege: Unpacking the Invisible Knapsack.” The impact of her essay was due at least in part to its clarity and readability; it broke down into a list of easy to understand ideas why white people have unearned advantages in society based on their skin color. Not that it was necessarily easy for white people to accept that they are in fact “more equal” than others, but the essay opened up a conversation that has gained serious traction in our social discourse.
People who do not have ancestral connections to Native communities are all either settlers or immigrants. People with ambiguous “Native ancestry,” like Elizabeth Warren, are so disconnected from whatever Native roots they may have had that they can no longer be considered Native. Settlers are people whose ancestors who came to acquire recently dispossessed Indian lands, such as recipients of the homesteads of the nineteenth century and earlier land speculators. Immigrants are people who came later to cash in on the benefits of American citizenship that didn’t necessarily include land (but might have if they came with enough money to invest in American land). Most are settlers (also “colonizers”) or immigrants by choice, with the exception of Blacks who are descended from slaves who were settled here without their consent.
Settler Fragility
https://www.beaconbroadside.com/broadside/2018/11/settler-fragility-why-settler-privilege-is-so-hard-to-talk-about.html?fbclid=IwAR2duAUoPmQa8DLs4c_WVBKS7OFmmWJtO_rWeKSO7OkjEYsRN5t3XBtLsR

I too am Harvard (5 minutes)

LISTEN: How Do You Respond to Microaggressions?

How to Handle Microaggressions

We Are Still Alive - A Traditional People in a Contemporary Society

Thank you for inviting me.  I know… I don’t think you’ve probably ever had an Arawak speaker here and probably haven’t ever heard of Arawak speaker.  We, the indigenous people of the Americas, are refugees. We exist despite an unacknowledged, attempted genocide. Most people associate refugees with being forced to leave one’s country, but a refugee, by definition, has lost their land and way of life, often through war or genocide. There is a long history of genocidal programs initiated by the early colonial settlers and, later, by the United States government.

In 1755, the lieutenant governor of the Province of Massachusetts Bay, issued a proclamation that called for British subjects “to embrace all opportunities of pursuing, [capturing], killing, and destroying all and every Indian.” A bounty was paid by the colonial government for every Penobscot captured and brought to Boston.

Within a year of the proclamation, the Massachusetts assembly voted to raise the ceiling on the bounty to an unprecedented 300 pounds. This Bounty Proclamation was signed by Lt. Gov. Spencer Phips just a short walk from here in the Old State House on State Street.

At the Sand Creek Massacre in 1864, John Chivington said, “Damn any man who sympathizes with Indians... Kill and scalp all, big and little; nits make lice.”

We were marched, relocated, and put in reserves like animals, ending up no longer being on the land which provided all our needs… where our stories and songs came from… where our ancestors’ bones lay in the ground.

In the 19th and 20th centuries, boarding schools were established. Our children were immersed in European-American culture. They were given haircuts, forbidden to speak their indigenous languages, and their traditional names were replaced by European-American names to both “civilize” and “Christianize.” 20th century investigations have revealed many documented cases of sexual, physical, and mental abuse in these boarding schools.

In 1892, the U.S. Army officer Richard Henry Pratt, founder of the Carlisle Indian School, said, “…all the Indian there is in the race should be dead. Kill the Indian in him and save the man.” On reservations, children were taken from our homes and forcibly sent to boarding schools until 1978, systematically destroying Native American cultural continuity.

Today in 2017, we are still fighting for sovereignty and treaty rights; hunting and fishing access; clean water and healthcare; and political and legal justice. On some reservations, Native women are murdered at more than 10 times the national average. Hollywood films, sports mascots, and many other racist images continue to dehumanize us.

On some reservations, families live on roughly seven gallons of water per day per person, since uranium mining has poisoned the wells and radioactive waste leaves no clean water. 40% of the 173,000 Diné living on the reservation do not have running water.  Today, in the United States.

As First Nations People, we have been made invisible, starting with the first maps that were created showing empty land where none of our languages or nations were identified. Towns were incorporated without any thought to the indigenous inhabits. Each “first” became a colonizer’s first – the first house, the first successful harvest, the first thanksgiving, the first marriage, the first baby – while our “firsts” were ignored and erased.

How does cultural genocide translate into today’s experience? I did not grow up speaking my indigenous language or hearing Native Nations’ music on the radio. I did not see people like me reflected in the literature I read, the television I watched and movies I saw, or even on the walls of my classroom. I did not learn the contributions of Indigenous People to this country, and certainly not the actual history of the United States. I did not have First Nations role-models who resisted and stood up for our culture, only those who helped the white Europeans, like Squanto, Sacagawea, and Pocahontas. There’s nowhere in the world where out story, my story, should even be required to be told, except here.

I’ve raised my children in a world that has not recognized our holidays and observances… In a world with stereotypes that have become the only way we are known and recognized… With peers who have harassed them about their long hair… When my son was in high school, a few boys danced around him singing, “woo woo woo.” They weren’t mimicking something they had seen at a pow wow, they were acting out all they knew from when they were much younger and saw movies, like Peter Pan. The racist images of Hollywood and athletic teams have been their loudest teachers.

Other people tell our story or stereotypes about it. We have no control over our own narrative in our own country. I am not currently fighting for food, or water, or heat, or housing, or healthcare, so I must use the privilege and platforms, the ones that I do have, to temporarily, even if temporary, to stand beside my indigenous sisters and brothers and be an ally to support their access, and all people’s, to these fundamental rights in a country as wealthy as ours.

We are refugees from our original lands. We cannot stay silent about genocide here or anywhere, anymore. Please consider joining an indigenous organization, like the Massachusetts Center for Native American Awareness, to learn more about us. We’re still alive - traditional people in a contemporary society.
Posted by Claudia A. Fox Tree at 6:39 PM

Video to Use for Racial Identity Theory

When you are explaining the "Encounter" phases of William Cross's Racial Identity Development Theory.

(Sec. 2) This bill amends the International Religious Freedom Act of 1998 (IRFA) to state in the congressional findings that the freedom of thought and religion is understood to protect theistic and non-theistic beliefs as well as the right not to profess or practice any religion.
https://www.congress.gov/bill/114th-congress/house-bill/1150
Posted by Claudia A. Fox Tree at 9:51 AM


It is now common—and I use the word “common” in its every sense—to see interviews with up-and-coming young movie stars whose parents or even grandparents were themselves movie stars. And when the interviewer asks, “Did you find it an advantage to be the child of a major motion-picture star?” the answer is invariably “Well, it gets you in the door, but after that you’ve got to perform, you’re on your own.” This is ludicrous. Getting in the door is pretty much the entire game, especially in movie acting, which is, after all, hardly a profession notable for its rigor. That’s how advantageous it is to be white. It’s as though all white people were the children of movie stars. Everyone gets in the door and then all you have to do is perform at this relatively minimal level.

Additionally, children of movie stars, like white people, have at—or actually in—their fingertips an advantage that is genetic. Because they are literally the progeny of movie stars they look specifically like the movie stars who have preceded them, their parents; they don’t have to convince us that they can be movie stars. We take them instantly at face value. Full face value. They look like their parents, whom we already know to be movie stars. White people look like their parents, whom we already know to be in charge. This is what white people look like—other white people. The owners. The people in charge. That’s the advantage of being white. And that’s the game. So by the time the white person sees the black person standing next to him at what he thinks is the starting line, the black person should be exhausted from his long and arduous trek to the beginning.
Posted by Claudia A. Fox Tree at 10:02 PM

In a course, Strategies to Close the Achievement Gap, that my colleagues, Elli Stern/Jennifer Wolfrum, and I teach, we ask participants (teachers, counselors, administrators, tutors, nurses, etc.) to get into a group and "become the expert" on an article that we have assigned for homework.  To this end, we then ask the group to construct a graphic organizer, mnemonic, or other visual aid to help "teach" the other groups about the article. 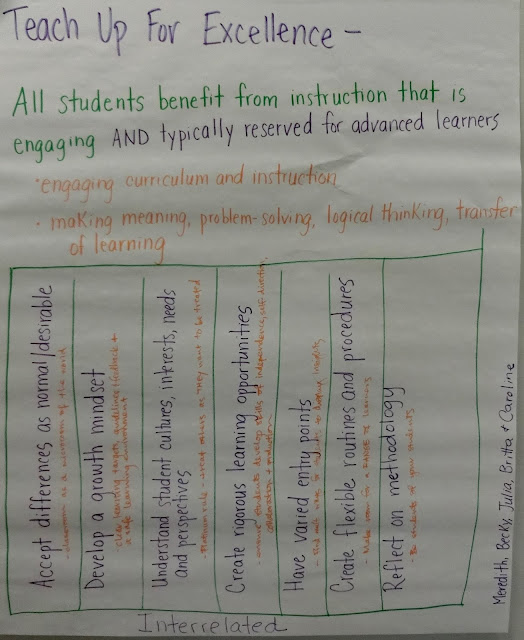 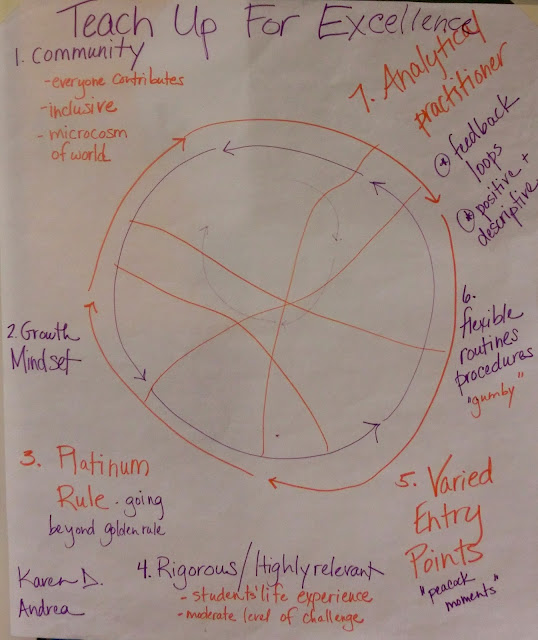 An important strategy for teachers is to have a growth mind set for their students so that they will adjust their instruction and practices to meet the students needs as they grow.  The greatest barrier to learning is often not what the student knows, but what the teacher expects of the students” (Good, 1987)

Having a community where all children feel comfortable allows the children to take some risks.  If teachers have high expectations for all students and they know teachers believe in them, they also willing to take more risks.  The environment needs to be full of trust, high expectations, and a lot of support for all to succeed. 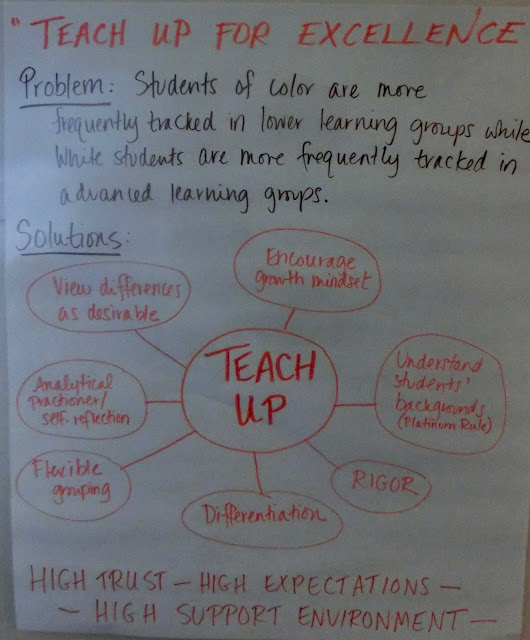 In a course, Strategies to Close the Achievement Gap, that my colleagues, Elli Stern/Jennifer Wolfrum, and I teach, we ask participants (teachers, counselors, administrators, tutors, nurses, etc.) to get into a group and "become the expert" on an article that we have assigned for homework.  To this end, we then ask the group to construct a graphic organizer, mnemonic, or other visual aid to help "teach" the other groups about the article. 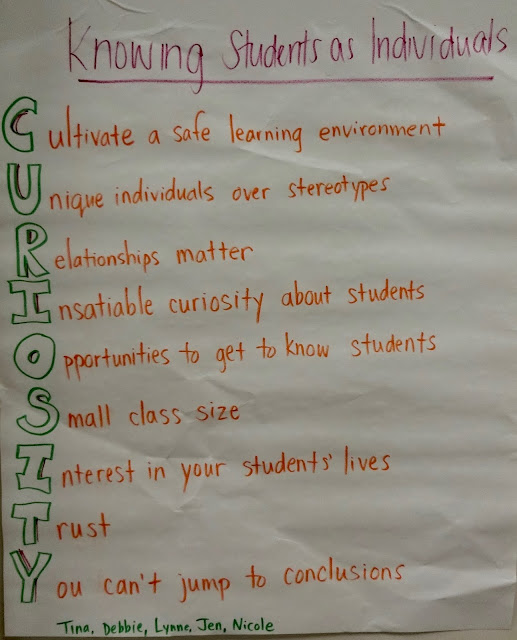 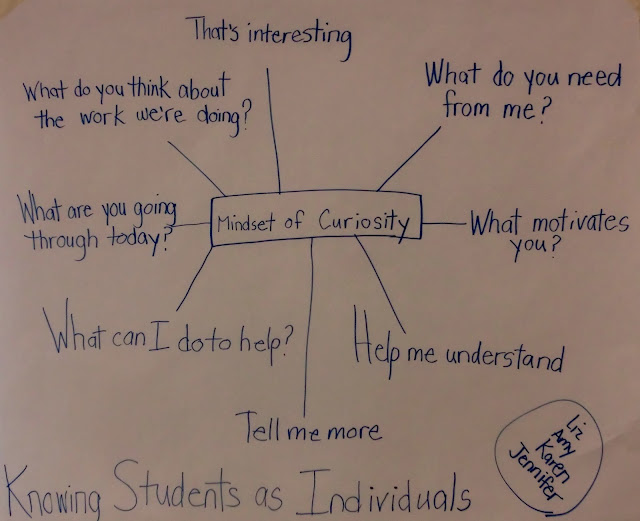 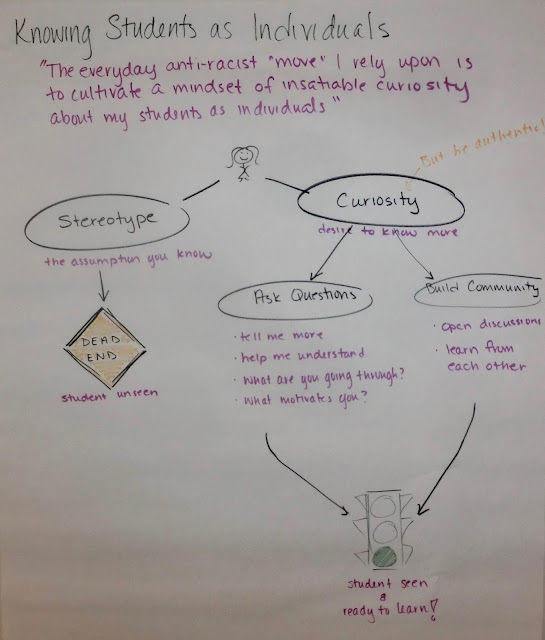 Search by Label or Category